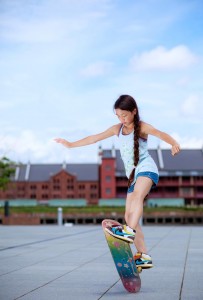 Mirei is a 13 year old girl skater form Japan. She’s been skating since she’s 8 years old. She likes both freestyle skating and street style skating, and took part in several contests of freestyle skating, as well as park style ones from 2009, and had some prizes in both field. In 2012 annual JFSA (Japan Flatland Skateboard Association) ranking, she’s No.4 ranked. This is the 1st worldwide skate contest for her.